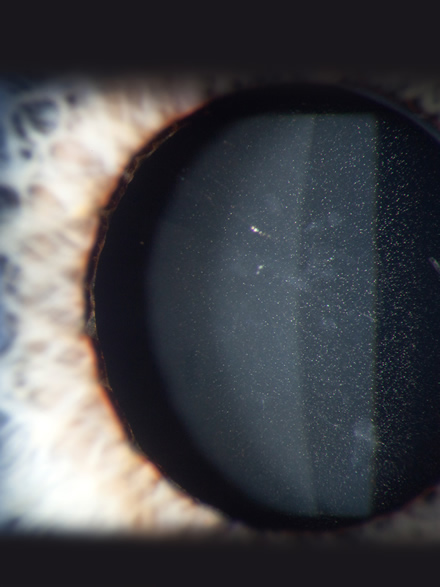 Perhaps this has happened to you. You’ve examined the cataract patient and deemed her an ideal candidate for surgery, selected the appropriate IOL, and performed the surgery without complications. The patient is thrilled, and so are you. Until glistenings—or worse, frank opacification—of the IOL appear in the postoperative period. We assume that the IOLs we implant will stay clear for the patient’s lifetime, but this is not always the case. When these late complications do occur, they can be frustrating for both the surgeon and the patient

Glistenings have been reported since the introduction of acrylic IOLs and are fairly common. The prevailing theory of their formation is that small voids in the IOL during manufacture become filled with fluid after implantation, likely facilitated by the change from room temperature to the higher temperature inside the eye. These voids may be potential spaces prior to implantation and cannot be seen until after surgery.

“These fluid-filled microvacuoles within the IOLs have been reported since the 1990s,” said Lémy Agbessi, MD, Bordeaux, France. “Their impact on visual function remains controversial.” Most studies have failed to demonstrate negative effects on visual acuity outcomes.

Dr. Agbessi conducted a study to evaluate the impact of glistenings on visual function. Her group reviewed the records of patients undergoing cataract surgery with implantation of a hydrophilic acrylic multifocal IOL. “Glistenings occurred in 65% of the IOLs,” she said.

Her study included 102 eyes of 51 patients who developed glistenings postoperatively. Of these, 32% were graded as mild, 21% as moderate, and 47% as severe, using image analysis software on slit lamp photographs.

When they compared mean distance and near visual acuity across these severity groups, no differences were observed. Likewise, Dr. Agbessi said, reading speed, aberrometry, and contrast sensitivity were comparable between groups as well.

The only difference observed was in glare severity, which was statistically significantly worse in the eyes with severe glistenings compared to the mild and moderate glistenings groups (p=0.01). Glare was assessed by patient report using the National Eye Institute Refractive Error Quality of Life instrument.

“The only predictor of glistenings was IOL power,” Dr. Agbessi said. Glistening severity increased with increasing lens power (p=0.04), she explained. Neither time from surgery nor any demographic attributes of patients correlated with the development or severity of glistening.

Far worse than glistenings is the rare occurrence of frank IOL opacification. This complication has been reported with both modern foldable IOLs and even older PMMA IOLs. It appears to be most common, however, with hydrophilic acrylic IOLs.

X-ray spectroscopy revealed calcium and phosphate deposits on 2 of the IOLs. On the 3 remaining IOLs, deposits consisted variably of carbon, oxygen, and sodium.

The presence of surface deposits could imply either primary IOL factors or patient-specific host factors as reasons for this phenomenon, but the presence of deposits within the substance of the optic are more suggestive that the IOL material itself may be responsible for the opacifications, said Dr. Ni. “Host-related factors such as high myopia and postoperative inflammation might also be involved in the process.”

The etiology of IOL opacification remains poorly understood. For glistenings, the issue is likely related to the polymer-based manufacturing process that leaves small voids in the optic that fill with fluid upon warming to body temperature. There is no patient profile that predicts when these undesirable outcomes might occur.

The best we can do at present is to be attuned to the occurrence of these complications and address them correctly. Some patients have been misdiagnosed and have undergone laser capsulotomy procedures and even vitrectomy surgery without benefit and with substantial risk. Correctly diagnosing primary IOL issues can help avoid these unnecessary procedures.

In most cases, glistenings can be observed without intervention, as their impact on visual function is usually negligible. Opacified IOLs often require explantation.

Editors’ note: Dr. Agbessi has no financial interests related to this article.