In routine cataract surgery, the natural cloudy lens (cataract) is removed, and an artificial intraocular lens is implanted.  The implanted intraocular lens should improve vision and remain clear.   There is growing evidence that the most commonly implanted lens in Canada, the Alcon Acrysof Intraocular lens, has inclusions, called glistenings (see Appendix 1, photograph of glistenings) which degrade vision.

Patients who have an Acrysof lens in one eye, and a lens of another material in the other eye will demonstrate glistenings only in the eye with the Acrysof lens.  Thus, this phenomenom is related to the material that the Acrysof lens is made from and is not due to a patient factor.

These inclusions are due to the manufacturing process of this lens.  The Acrysof lens is molded, and the process results in gaps forming within the Acrysof material.   Temperature changes when the lens is implanted (going from room temperature to body temperature) allows water to collect in the gaps.  (Miyata A, Yaguchi S. Equilibrium water content and glistenings in acrylic intraocular lenses. J Cataract Refract Surg. 2004 Aug;30(8):1768-72 ).

Glistenings are present in the majority of  patients with Acrysof lenses.  (Christiansen G, Durcan FJ, Olson RJ, Christiansen K. Glistenings in the AcrySof intraocular lens: pilot study. J Cataract Refract Surg. 2001 May;27(5):728-33.)   In a review of 254 eyes with Acrysof lenses,  it was found that 62 % had mild glistening inclusion, 16% had moderate, 11% had marked and 1% had severe glistenings (Dr. Richard Smith, Australia).

In order to improve vision in patients with cataracts, the cloudy lenses are removed and  replaced with clear artificial intraocular lenses.   Studies have demonstrated that intraocular lenses can restore the vision to that of a 20 year old young adult.   Glistenings, however, cause light to be scattered and can result in vision comparable to that of a 70 year old individual with cataracts.   Thus, instead of achieving a sharp, clear Snellen acuity of 20/20, the patient has vision degraded by glare and poor contrast. (Van der Mooren M, Coppens J, Bandhauer M, Van den Berg T. Presented at ARVO 2007.) Appendix 2 shows a simulation of night time vision in  a patient with glistenings.

A study on visual function has shown that glistenings in AcrySof lenses were related to a statistically significant loss in contrast sensitivity at high spatial frequencies (Gunenc U, Oner FH, Tongal S, Ferliel M. Effects on visual function of glistenings and folding marks in AcrySof intraocular lenses. J Cataract Refract Surg. 2001 Oct;27(10):1611-4.   Another study has shown that eyes with higher grades of glistenings had a small but significantly greater decrease in visual acuity than those with lesser grades (Christiansen G, Durcan FJ, Olson RJ, Christiansen K. Glistenings in the AcrySof intraocular lens: pilot study. J Cataract Refract Surg. 2001 May;27(5):728-33.)

Probably the most important recent finding is that the density of glistenings increases with the duration of follow-up, and that the density does not level out.   This was found in a study that subjectively and objectively evaluated patients with Acrysof lenses with 150 months of follow-up.   Thus, the severity of impact on vision will increase over the lifetime of a patient implanted with these lenses.  (Behndig A, Monestam E. Quantification of Glistenings in Intraocular Lenses using Scheimpflug Phtography. J Cat Refract Surg 2009; 35: 7-14.)  (See Appendix 3).

Surgeons are becoming increasingly aware of the adverse effects of these glsitenings; a search of the FDA website for reporting adverse effects has 106 records between July 3, 1997 and June 4, 2009; 96 were regarding Acrysof lenses in cases with decreased visual acuity or other symptoms leading to a decrease in visual quality and fourteen reports were related to IOL explantation of Acrysof lenses (Werner L. Glistenings and surface light scattering in intraocular lenses. J Cat Refract Surg. 2010 36: 1398-1420). Public health officials are also becoming aware of the effect sof glistenings.   In a recent review of the Alcon Acrysof lens by the US Department of Health and Human Services, (DEPARTMENT OF HEALTH AND HUMAN SERVICES, Centers for Medicare & Medicaid Services,  42 CFR Parts 410, 411, 412, 413, 416, 419, and 489 [CMS-1504-FC and CMS-1498-IFC2], RIN 0938-AP82 and RIN 0938-AP80, published Nov 2010; available at default http://www.ofr.gov/OFRUpload/OFRData/2010-27926_PI.pdf , pages 994 and following:

In a recent study of the light scattering effect of Alcon Acrysof lenses, Dr. J. Colin reported that the value of the light scattering as measured using the C Quant device ranged from log (s) of 1.49 to 1.89 (Colin J, IOL Glistenings, Clinically Significant?, presented at AAO 2010).   Healthy young individuals have been reported to have values of  0.85; values of 1.49 represent greater than 4 times increase in retinal straylight and a significant deterioration in vision, as illustrated below (Van den Berg T.  Introduction to Retinal Straylight).

Fig. 1 Simulation of vision in a normal young individual on left, and patient with retinal straylight value of 1.47 on the right, illustrating the decrease in vision and contrast.

Fig 2. Simulation of effect of light to a patient with a retinal straylight value of 1.47 on the right compared to normal vision on the left. 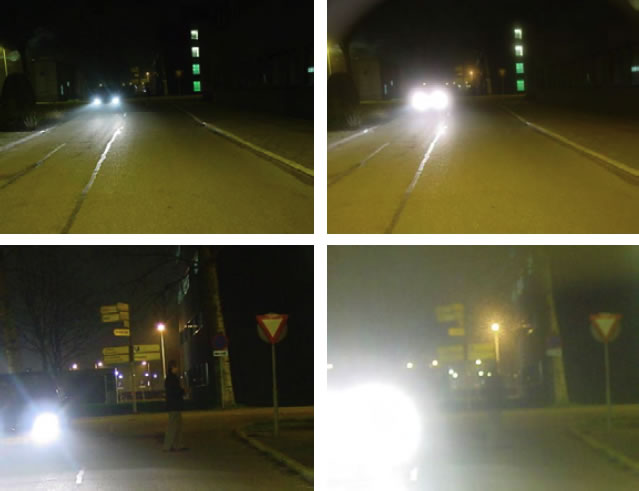 Fig 3 Simulation of effect of glistenings on night time vision. With a straylight value of 1.47 on the right, there is significant glare which makes it difficult to see the pedestrian in the lower picture.
The evidence is overwhelming that glistenings in Acrysof intraocular lenses have an adverse influence on vision.   The goal of cataract surgery is to remove cloudy crystalline lenses and replace them with clear lenses which improve vision.   Acrysof lenses with their glistenings do not accomplish this aim and the use of these lenses in cataract surgery patients should be reconsidered.